G.D. has spent many years in the field building his various creations! The accumulated time spent on construction, by organizing a dedicated site each time, represents more than 10 complete years of life. Of course each time the minimum budgets have been followed by deplorable working conditions (lack of protection, infernal cadences, etc.)! However what satisfaction to make live these gears results of a  successful dream.

The "canoe" of 17 m was built in Hennebont, in 5 months, in a hangar waiting for demolition.This was Guy's first major successful construction project.

Hosted in the first site of Multiplast in Carquefou, Guy started the Rosières building alone, before regrouping a small team of friends (Nordahl Mabire, Jean-François de Prémorel, Frédéric Guérin, Robert Canet) to help to repair errors of the architect Ollier. These terrible structural and hydrodynamic errors will considerably delay the project which had contractually to be on the starting line of the Route du Rhum! This lack of preparation will be sanctioned by  the "folding" of the proa at the start of the "Rhum"!

Close from Montpellier Guy Delage installed the "Must" shipyard site to ensure the construction of this high-tech sailing ship far ahead of its time! Integral wing, totally carbon balestron, automatic adjustment  of the ballast, two T- shaped foils controlled by the backstay tension, etc. This sailboat was a sum of innovations put into music by Hervé Devaux and Gilbert Saint Blancat!

It is regrettable that the mayor of Montpellier did not understand that the development of this kind of project can not be done in some days !

Construction in traditional sandwich (Corecell foam- vinylester resin -fiberglass) realized in two and a half years. Helped sometimes by some friends of whom François Kremer, it is in the Seyne sur mer town that this construction took place!

For Erik Lerouge, the architect, the quality of construction of Itzamma is a reference !

G.D. also realized the carbon mast. If you would like to know more about the construction methods:

The original "architect" Julien Marin having made serious mistakes in his plans ! G.D. and Manu Alban corrected  (before it was too late) all the calculations both hydrodynamic and structural of the sailboat! These errors cost two years of modification of the shape and structures in the construction which lasted 6 years!

It is the first sailboat built in Strip-planking by Guy. Wood was preferred to foam for its impact resilience as part of a navigation program that incorporated Antarctica and the risk of impacting growlers! Dagda had been designed closely unsinkable to favor the survival of the crew in case of shipwreck in the fortieth! The carbon mast was built like that of Itzamma (vacuum on a polystyrene male plug). The lifting keel that allowed access to shallow depths (1.5 m) was powered by a 4/4 winch. The sailboat was weighed permanently during the construction in order to situate the CG in relation to the buoyancy center.

This traditional shape design by G.D. is built in exotic materials allowing it to move very little water!

A mold is made, allowing the production of other hulls! 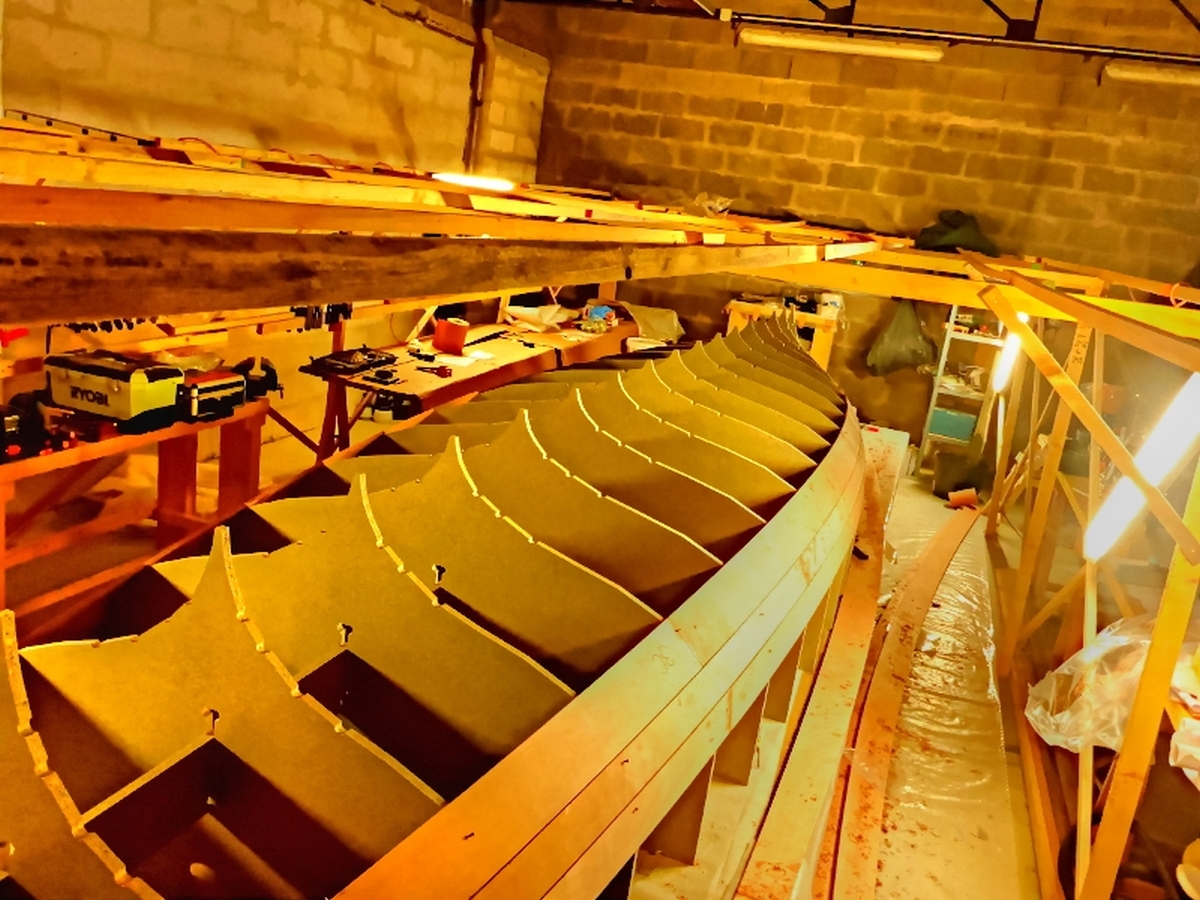 CNC cut couples are in place. The planked edge of plywood  rises  slowly 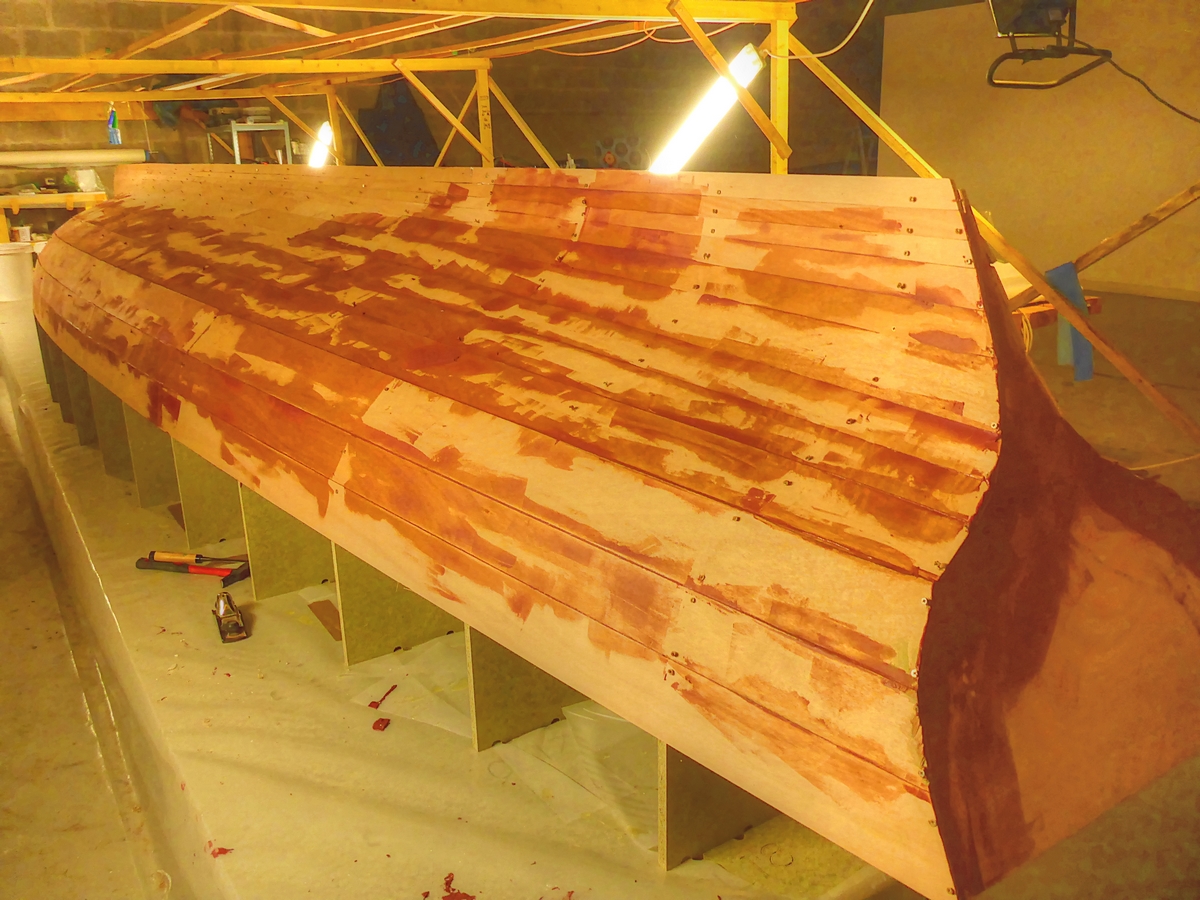 The yole is lined plywood. 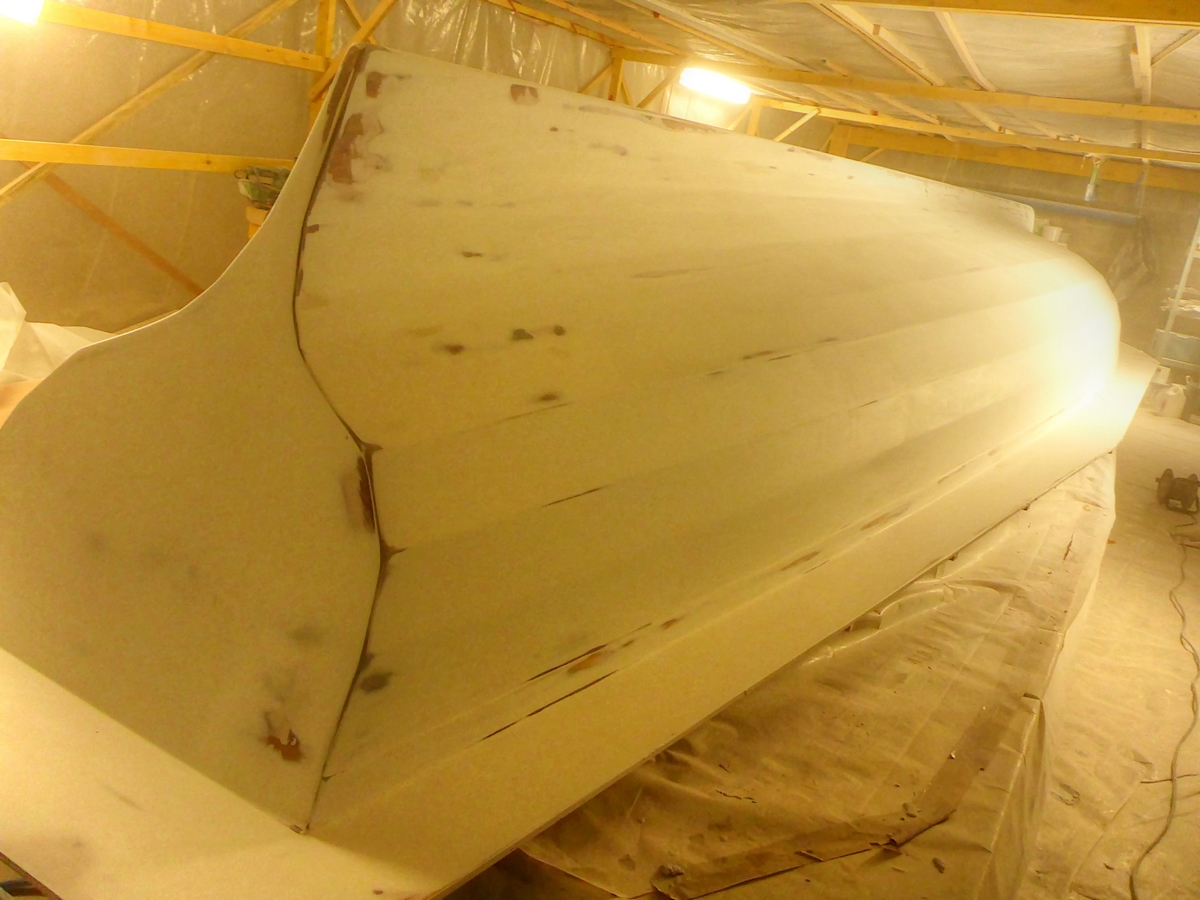 Exterior finishes of the plating before pulling a mold and turning it over !

Designed by Gilbert Saint Blancat, this raft was made partly by Guy Delage (model and tools) and by Thierry Elluère for the prototype that crossed the Atlantic. "Work of art" built in sandwich carbon by T. E. well known for the quality of his production in the world of racing boats racing, this raft perfectly fulfilled its mission of accompanying the swimmer across the Atlantic! 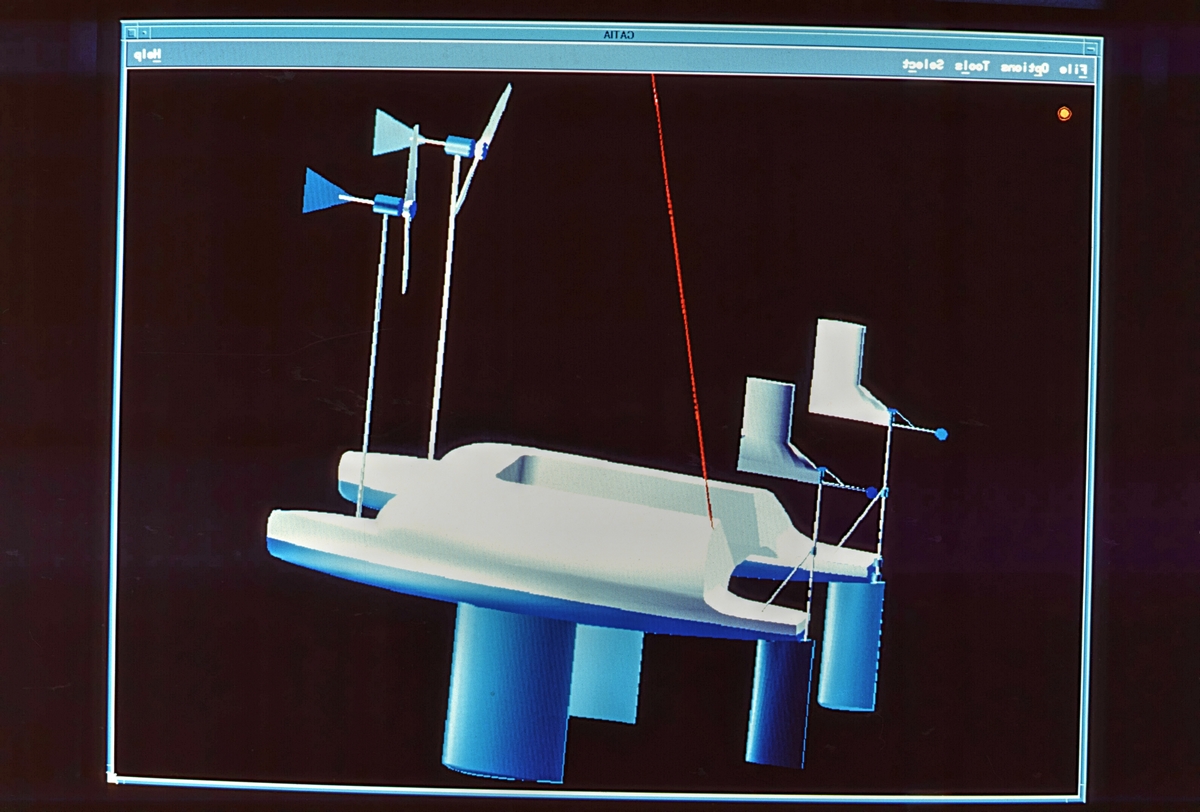 Its very low speed required huge appendages so that it could follow the trajectory imposed by the swimmer.

Guy Delage's safety float crossed the Atlantic by being pushed for 55 days. Built in carbon, this small waterproof float was a nest of technology integrating both Guy Delage's satellite transmission systems, safety (mini life raft) and the ability to swim without adding too much drag! 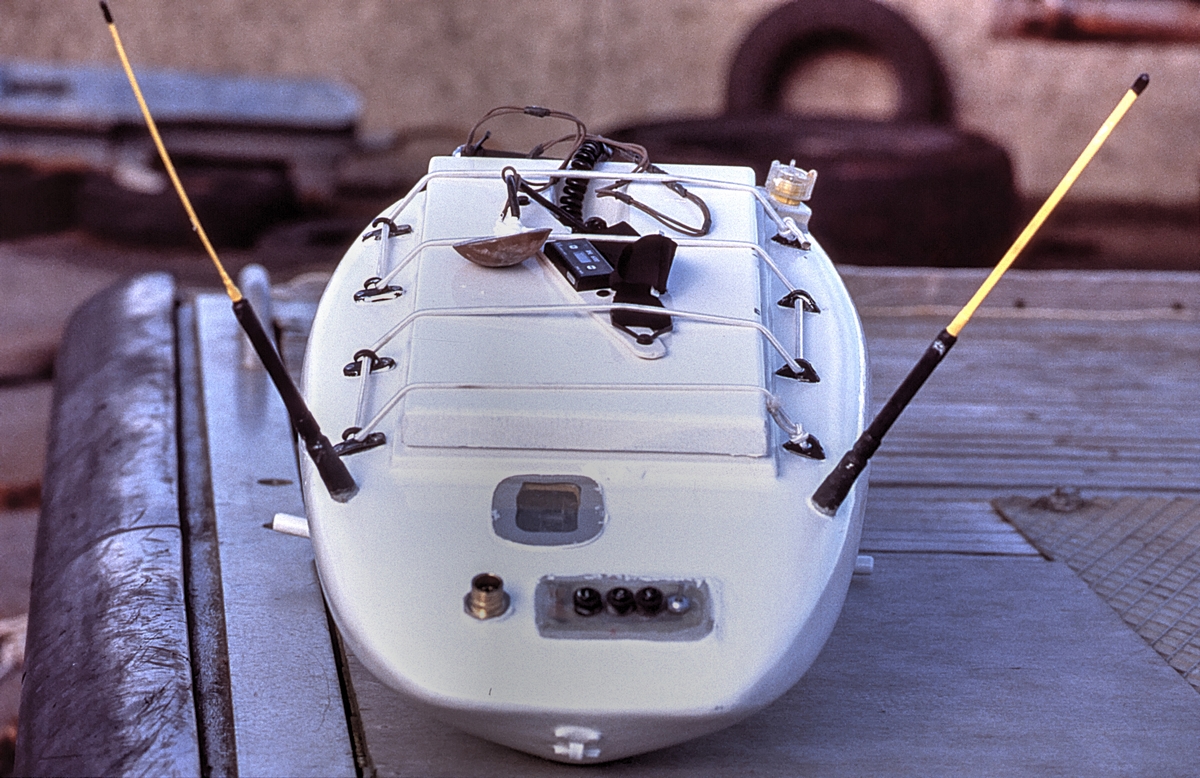 In this float, there were the swimmer's ultimate safety systems as well as the swimmer's automatic body data transmission systems

This innovative microlight aircraft in1989 was designed by Guy Delage. The tools (model and mold) were built by the Carmagnani yard (since disappeared) and it was G.D. who built the two carbon prototypes - Nomex (honeycomb) and Airex foam. The first shell weighed 75 kgs, the second that crossed the Atlantic weighed about 52 kgs. 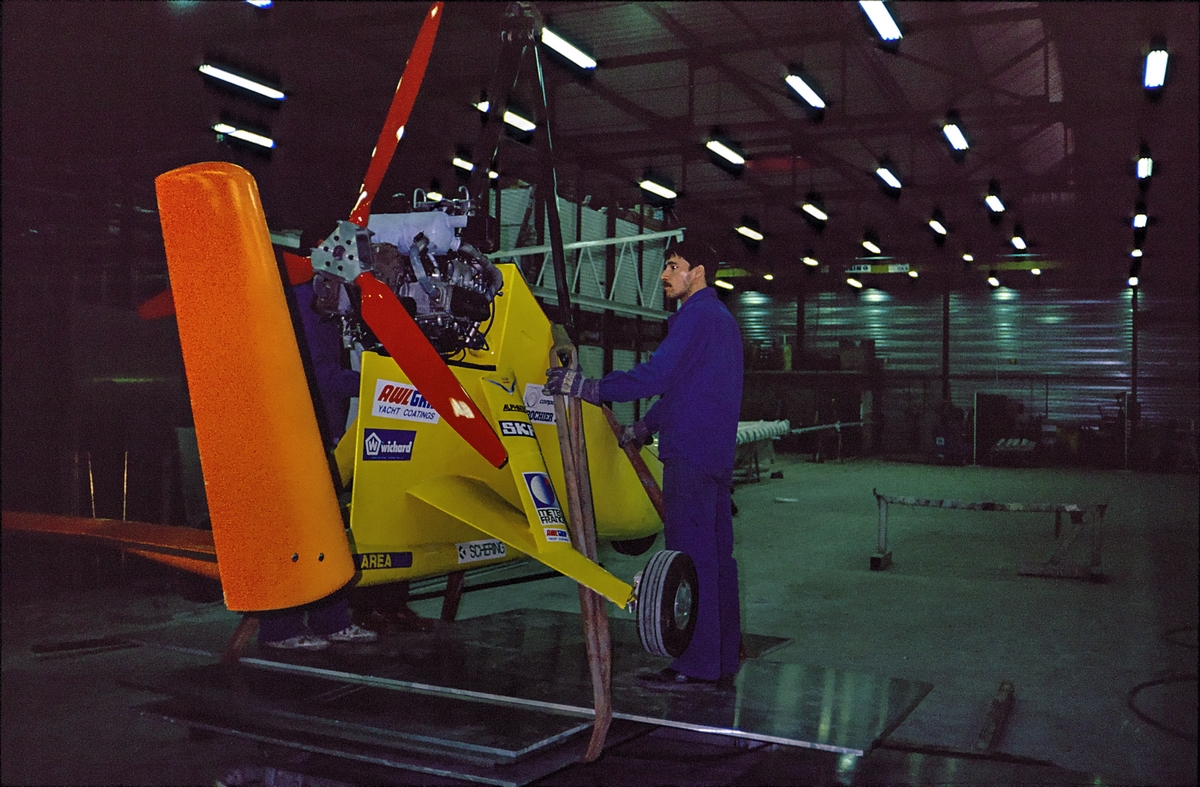 In 2016, Guy and Larysa build 2 sea kayaks. Big carriers for long expeditions, they allow to remain a long time autonomy and to carry a lot of material! Their substantial stability does not allow them to eskimo. They are constructed of carbon- CPs.

In 1987 Guy develops a hull destined for the "Baroudeurs" and "Maestro" microlights! Amphibious with a retractable train, it allows him to take off from the Larzac to join some Spanish islands or simply the damp lakes of Languedoc Roussillon!

Here again, it is a foam sandwich from Airex, epoxy glass that achieves the minimum weight and resistance objectives imposed by the specifications!

At this point, he also developed a hull for Mr Delpech's amphibious tandem biplane Transat. 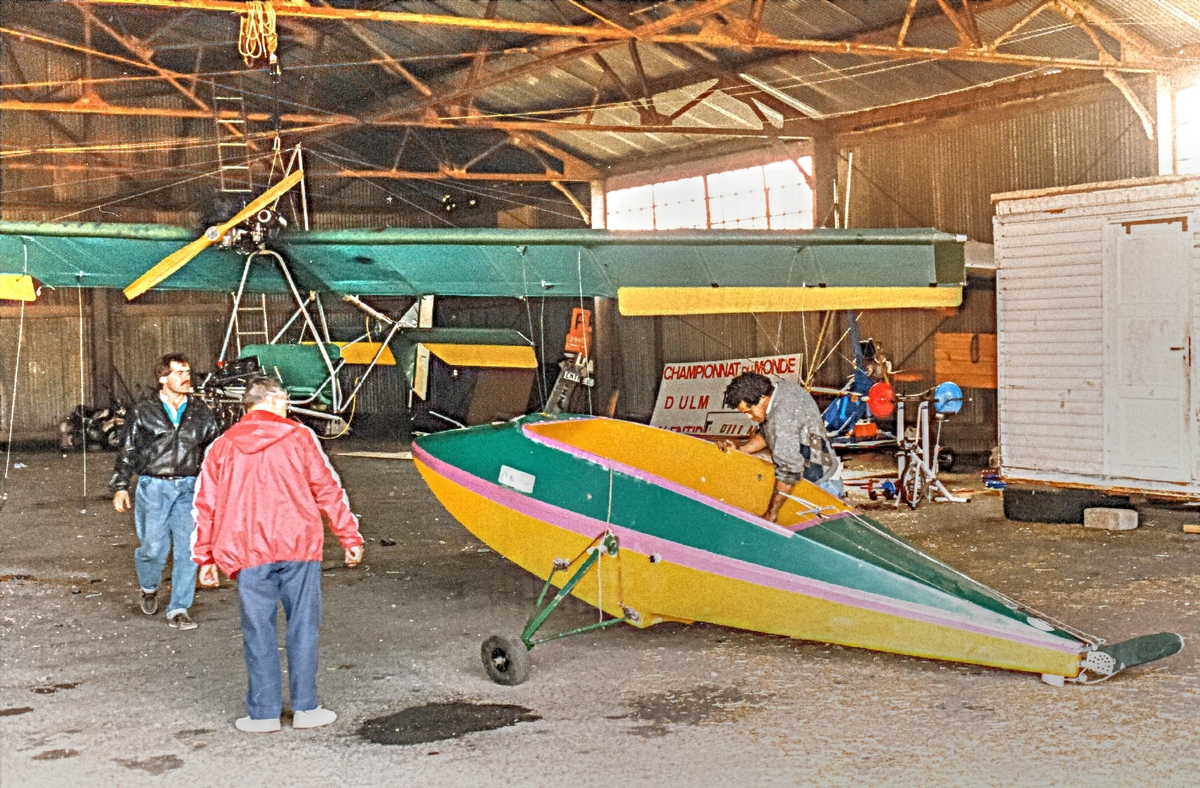 Installation of the hull N ° 2 of series 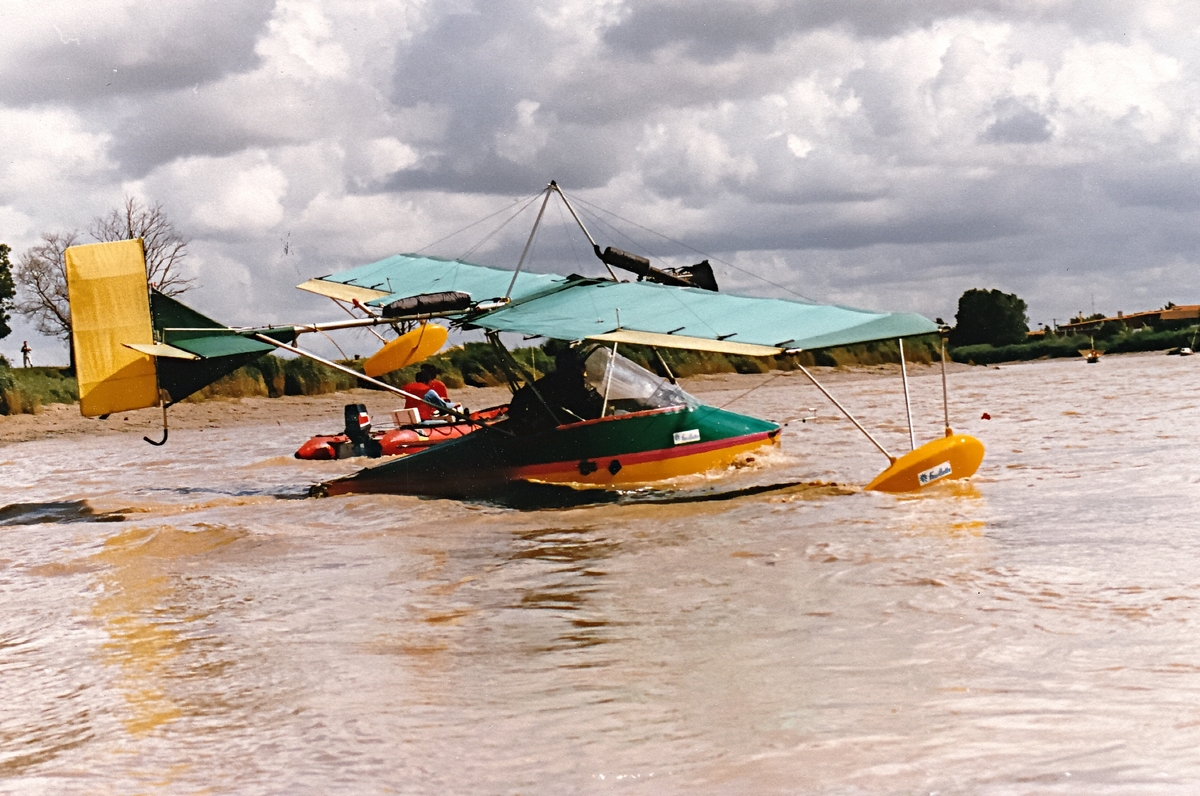 . Floats for flying wings and and hydro ULM:

In order to apply the patent filed in 1988 with the assistance of ANVAR, G.D. designs, designs and builds a range of floats for microlights rikes and flying wings. It is the Feuillette establishments that obtain the manufacturing  license. These floats are very resistant and have exceptional performance! 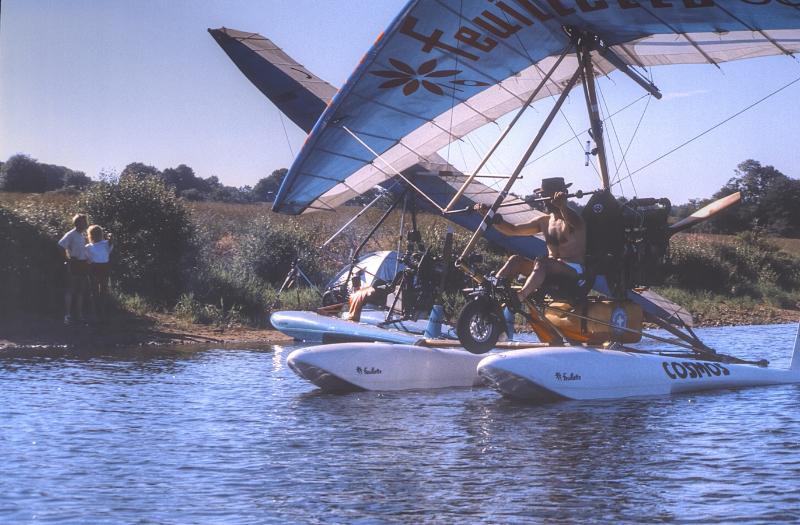 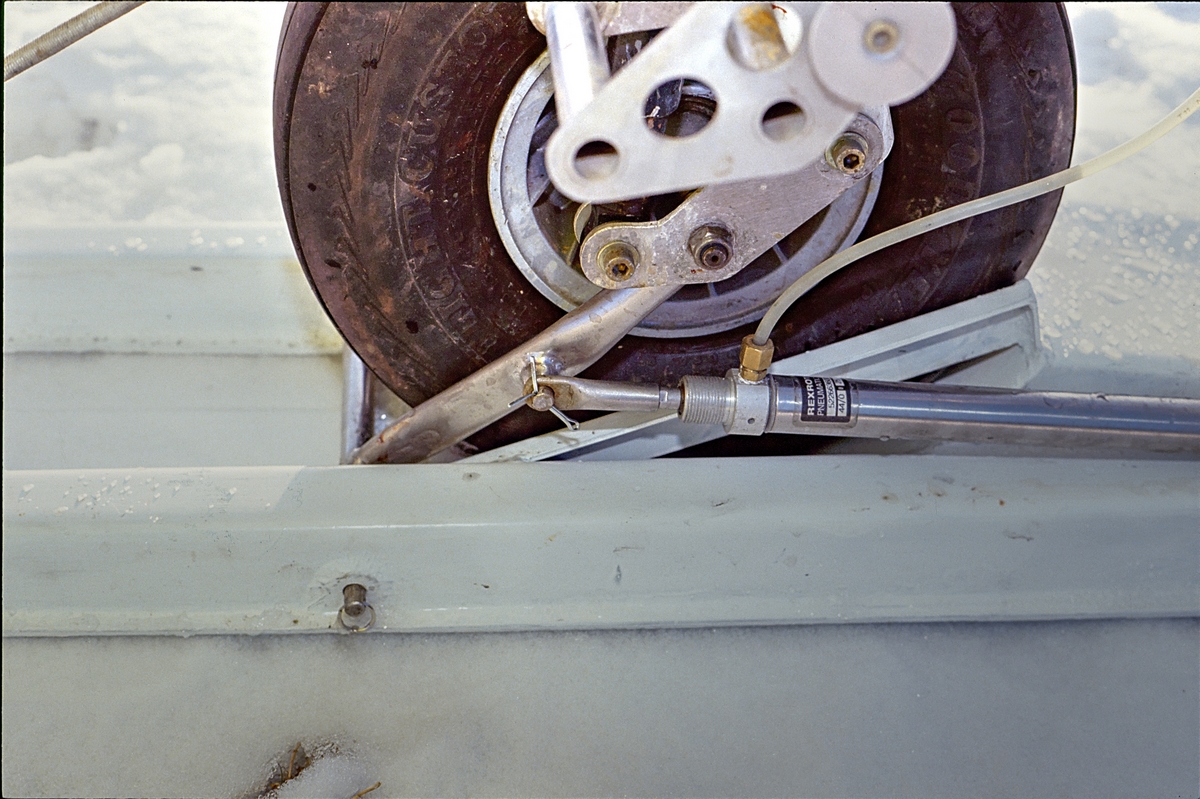