"After 15 years traveling the oceans on my charter sailboat and on my large racing multihulls, following a trail of 350 000 miles and several dozen Atlantic crossings, I still like to run in pursuit of the far horizon curves continuing  fleeing constantly behind the waves. Atlantic, Mediterranean, Caribbean, Pacific, Indian are all maritime areas that I have haunted and that always attract me with the same force! "

Since 1978 Guy Delage imagined and built extraordinary sailboats, fast and resourceful, with which he traveled the world.

You will find here the description of each of sailboats that Guy Delage was the inspiration and who made him vibrate. Everyone of them was at one point, the projection of his oceanic experience.

The construction of this fast and light yole is in progress. A drawing that recalls the Bantry yoles and which should allow to line up miles in coastal sailing.

GD has been in charge of the survey of design and construction of a large catamaran that is both very fast and luxurious, which is the synthesis of what is best done in the field of shipbuilding one off without entering the Aeronautical budgets! The news section will be fed soon with the characteristics of this sailboat still "secret" 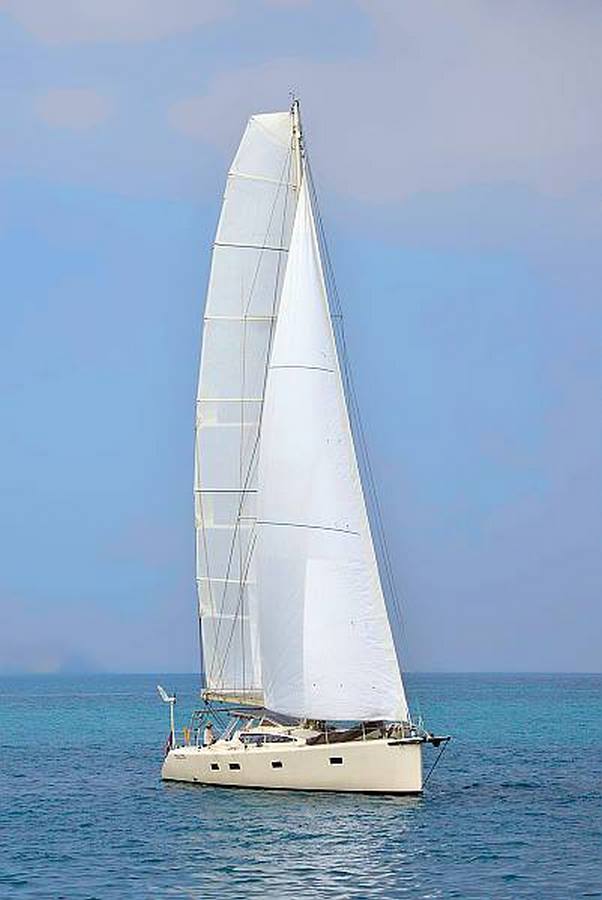 Dagda was a magnificent monohull designed to sail all the seas of the globe. Built in strip planking, lightweight and therefore just unsinkable, it has scoured the Caribbean and Polynesia, utilizing the performance of its sails and renewable energies. As he was preparing to descend to Patagonia and Antarctica, he struck an OFNI at night in the South Pacific. Guy and Larysa were not able to rescue him and they abandoned the quasi-flowing wreck. The remoteness of the shipwreck did not make it possible to find him to try to bail him out. Perhaps it still derives almost entirely submerged (as it was seen by a freighter a month later) because its construction was remarkable.

It is always difficult to recover from such a "blow"!

"Itzamma is a cruising catamaran built on plans of naval architect Erik Lerouge. This fast and comfortable sailboat has sailed the Caribbean for several years before being sold in 2006.

The proa "Montpellier Languedoc Roussillon" built in 1985 using composite construction techniques and advanced revolutionary rig which was used since 2010 year by catamaran of the America Cup.

In 1982, the proa "Rosieres is built using all modern technologies. Many difficulties settings and several errors of Ollier, the designer, resulted in failure.

The monocoque Salamander 12 meters long, built in 1978 in yards Pouvreau. 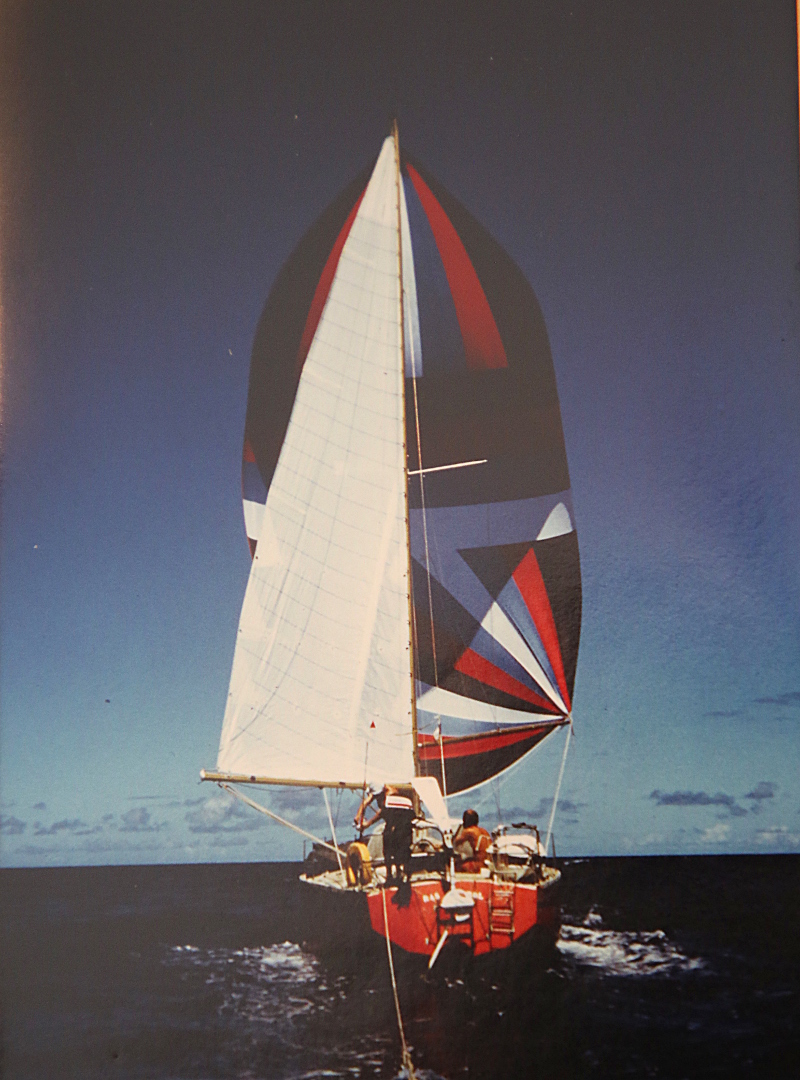 The first boat of Guy Delage's own. It will refit and re-equip it while sailing between the Mediterranean and the West Indies.

Skipper several seasons on this sistership of the famous boat of Bernard Moitessier, it is the deficiencies of this sailboat too heavy and without stability who will direct the steps of Guy Delage in the search for good and comfortable sailboats! 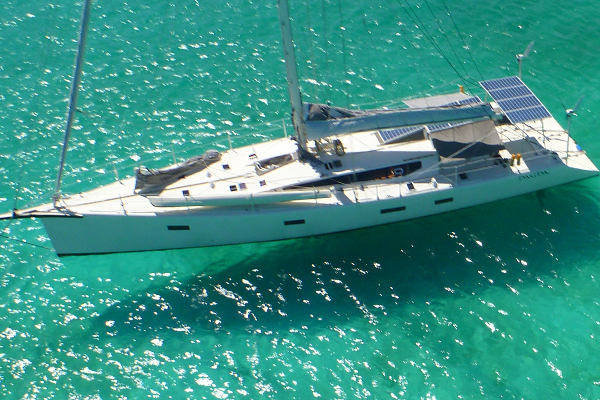 Dagda, a 60-foot ecological monocoque, combines performance and comfort. Very pleasant to the sea, its equipment in the field of renewable energy recovery made it an autonomous sailboat over very long periods without being forced to take away large quantities of fossil energy!

- Renewable electric energy: 1 kW of solar panels, two wind turbines and above all the electric motors in "reverse" produce the energy when sailing.

Dagda had an average speed of 9.3 knots

During the 70,000 miles he has traveled, several times it will reach 18 knots under conditions of sustained wind. Its best performance over 24 hours was 327 miles. 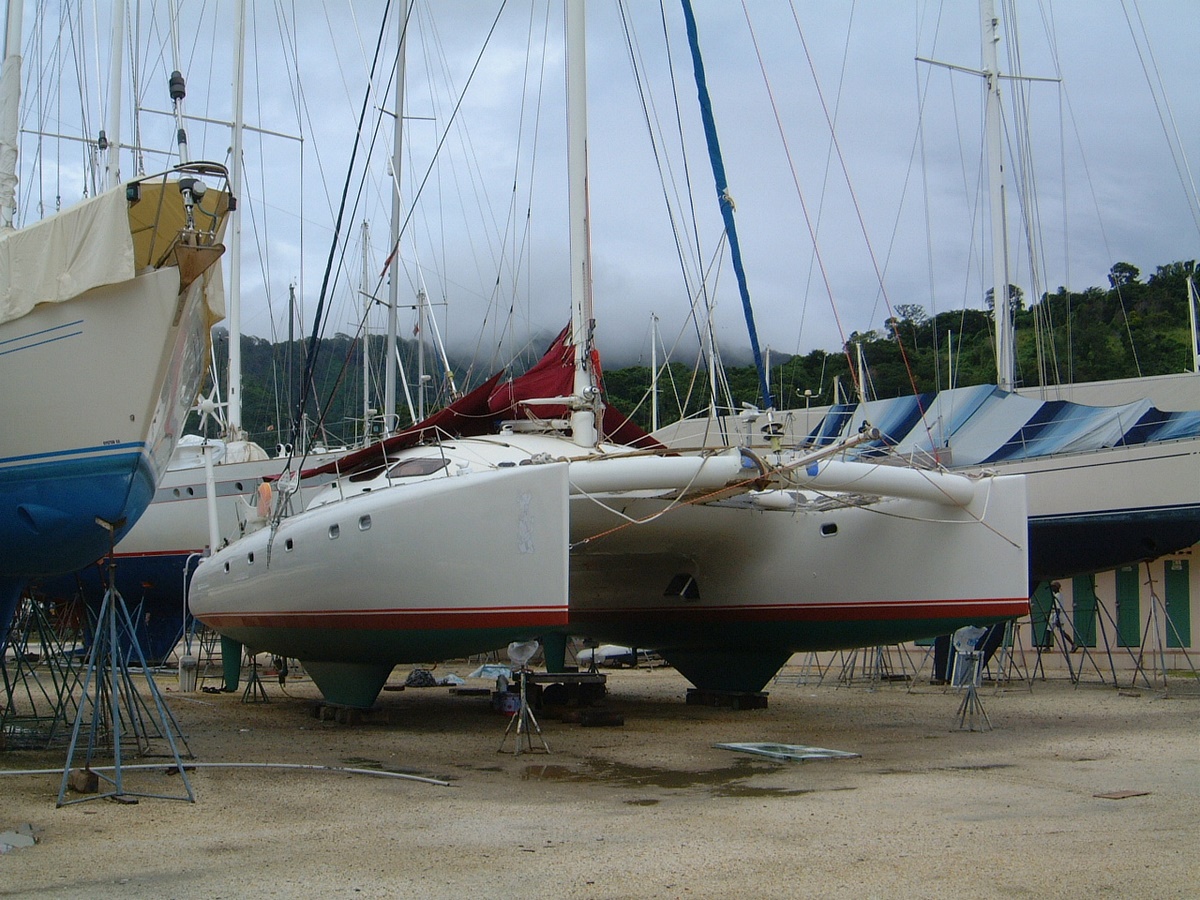 Itzamma, a fast and comfortable cruising catamaran, will allow Guy Delage to visit the most beautiful places of the Caribbean.

This superb catamaran has been completed and launched in February 2002. Carbon was widely used. The rotating mast is maintained by a all textile rigging. ​​Itzamma is a particularly fast and robust catamaran! Its best performance over 24 hours has been with Guy delage of 386 miles. 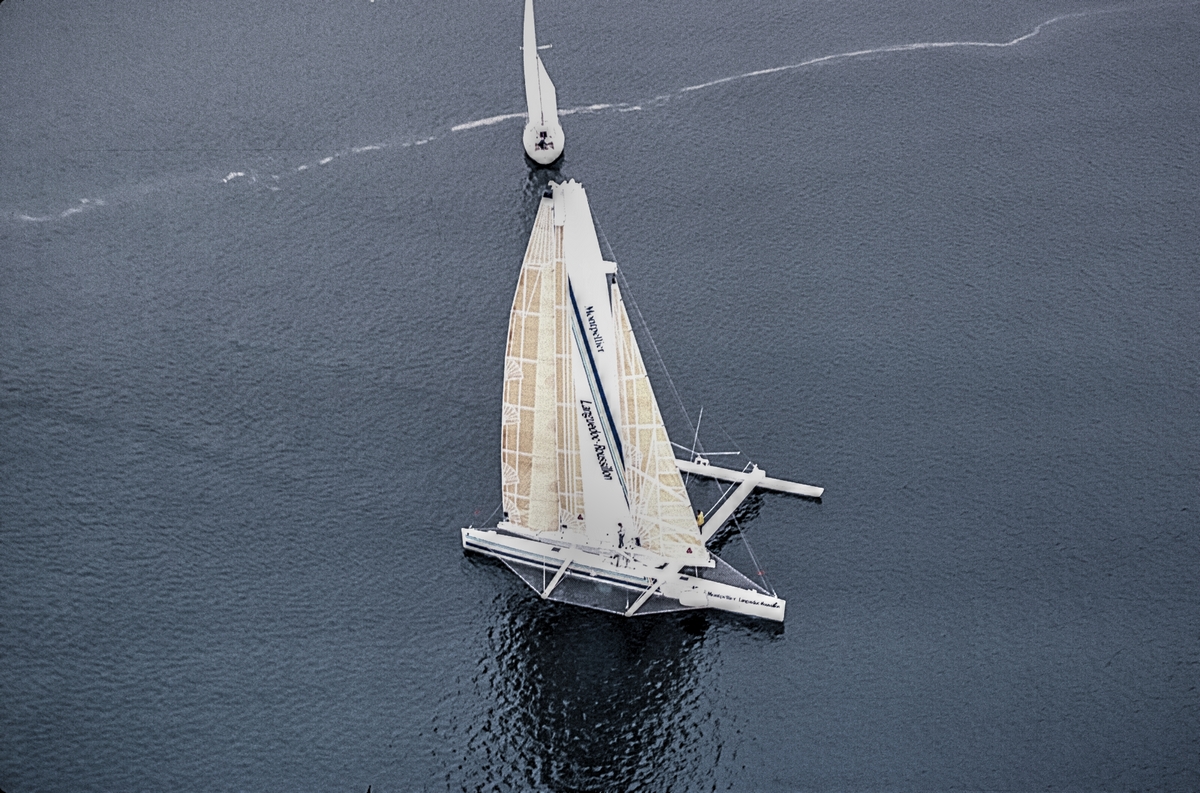 The proa «Montpellier Languedoc Roussillon” used advanced composite construction techniques (not common for the era) and a revolutionary rig that has been taken over for the present America's Cup catamaran !

The rigging is made of carbon - epoxy - honeycomb sandwich

Montpellier Languedoc Roussillon is the first ocean sailboat whose rigging was replaced by a real wing equipped with high lift devices. Its performance was astounding and its ease of use extraordinary. The project was stopped by the Mayor of Montpellier following the change of majority of the Regional Council and a dismasting consequent to the breakage of a defective part.

The sailboat was discreetly destroyed by the Montpellier Major  four years later for electoral reasons. 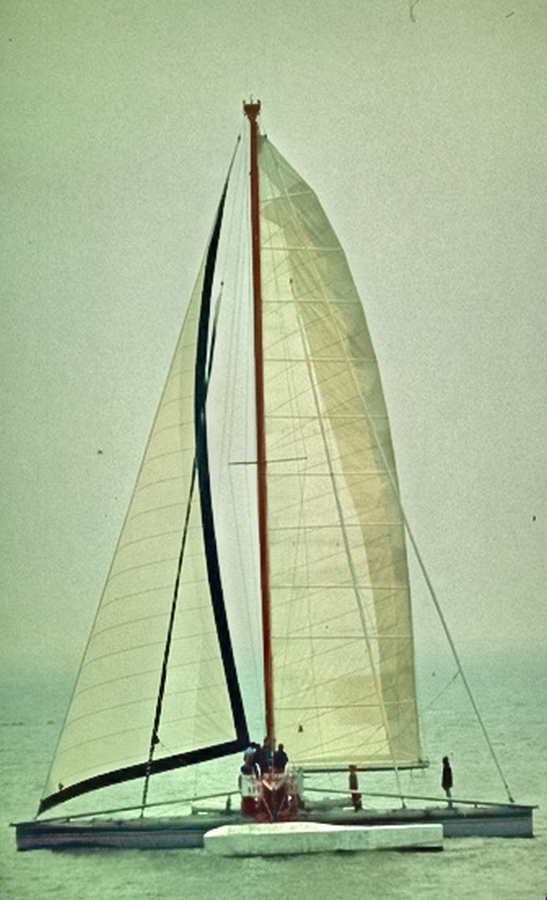 Rosieres, sailboat born evil: the initial structure calculations of the architect Gilles Ollier proved false. The project took as long overdue, requiring a lot of modifications on Ollier previous drawings. The sailboat, because of an autopilot failure and risk-taking following the failure, fold himself back 18 minutes after the start of the Route du Rhum 82. Insurance, anxious to recover the wreckage as quickly as possible, unfortunately destroyed it during the towing. 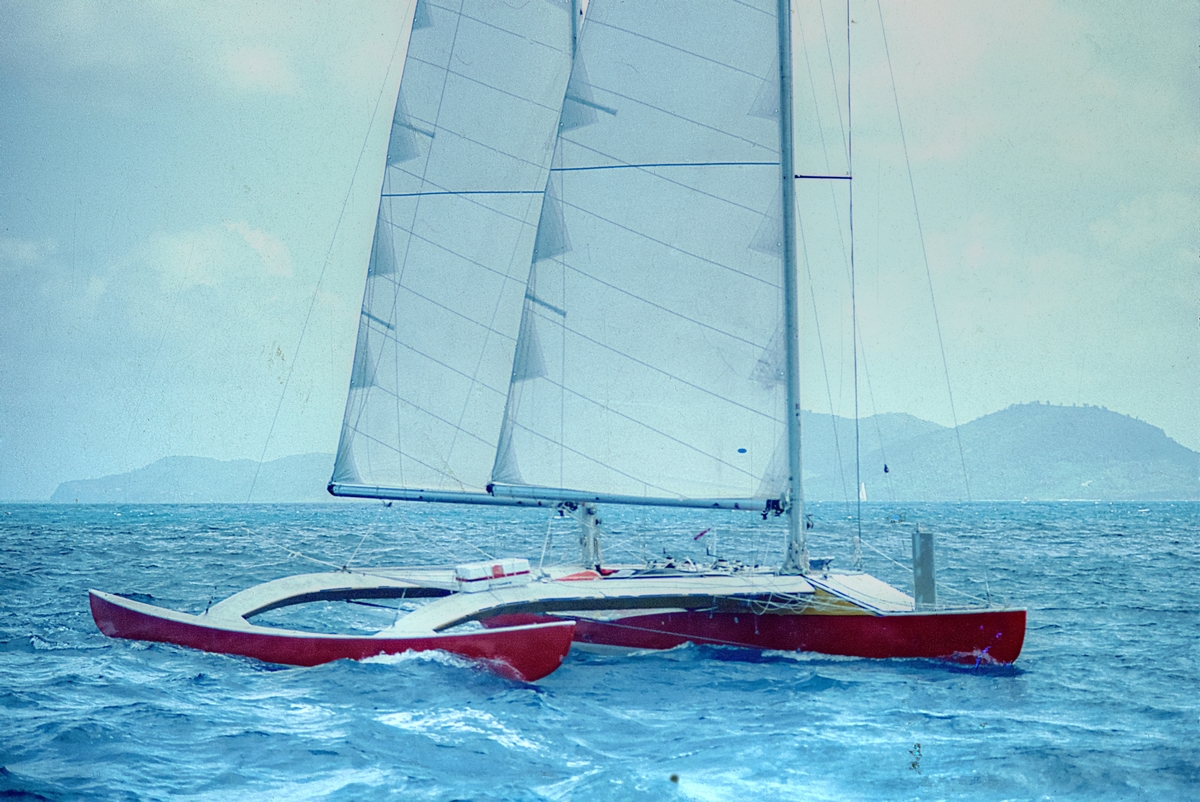 The proa "Atlantic" Funambule was the first composite building by Guy Delage. He sailed until 1991 before to be let like a pontoon in Senegal by the second hand owner !

Funambule was a very typical boat suffering from major shortcomings upwind. Its polar favored the crosswinds trips. Like all proas he demanded extreme vigilance in ocean crossing trips, but it was a fantastic boat with high RM and so high speed potential. Best 24 h day in 1982 was 450 nautical milles !

it is he who gave Guy the immoderate taste for these amazing boats!

Smallest boat having broken the record of the schooner Atlantic (14m at the waterline) in a little more than 10 days! 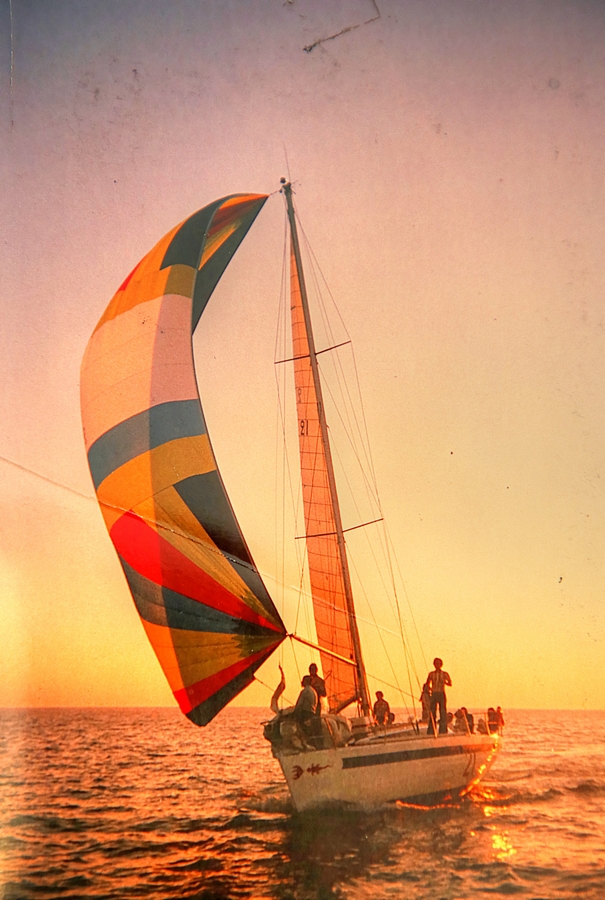 "Salamandre", an aluminum monohull of 12 meters that prefigures the generations of modern yachts with very wide rear. She was built at the Pouvreau shipyard in Vix french Vendée). Guy Delage took part in the first « Route du rhum » and finished second in his category and 9 th in the scratch in front of much larger sailing ships! Guy Delage and Dany Delage will then use it in charter in the West Indies. 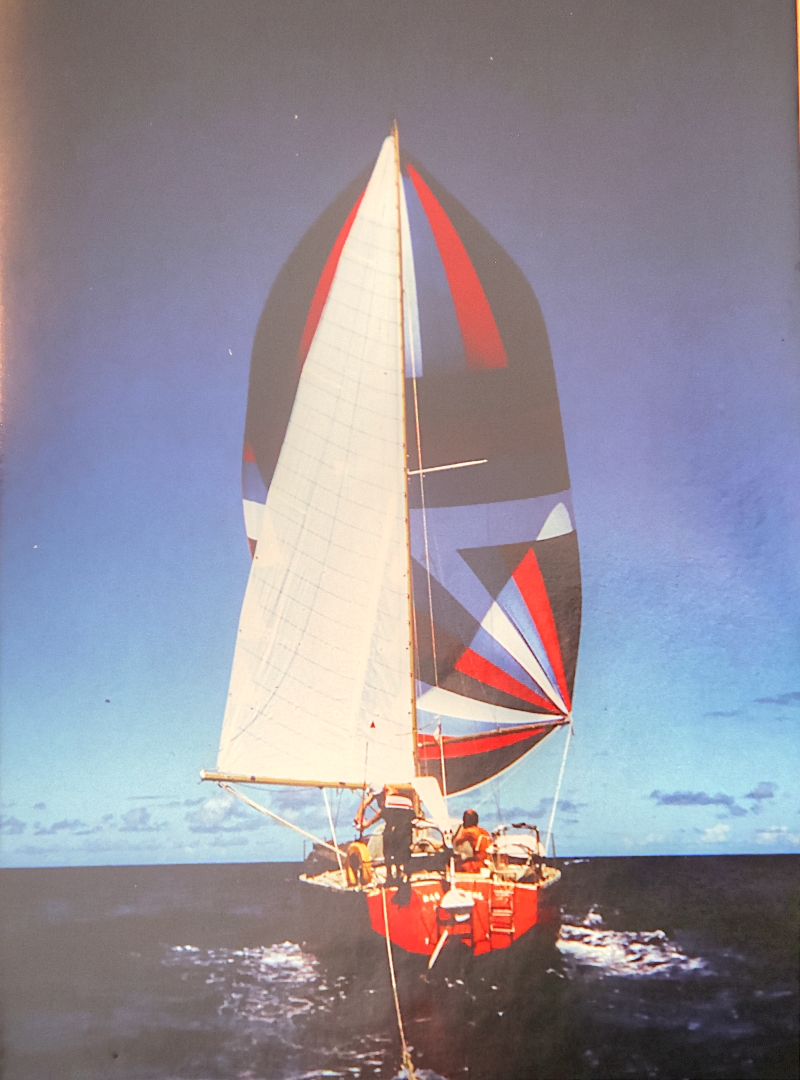 The first boat of Guy Delage's own. It refitted and re-equiped and sailed sevral times between the Mediterranean and West Indies waters.